This post is a primer quick guide to distributed energy systems and assumes no technical background on the part of the reader.

You may have heard terms such as “microgrid”, or “Distributed Energy System (DES)” in the news, especially after storms or fires cause outages impacting large areas. Microgrids are a specific type of DES, and are widely recognized as a key to keeping the power on. If you are wondering what these technologies are, or what they do, read on.

A Distributed Energy System (DES) provides electrical and/or thermal energy from resources at or near the point of end use, at the distribution level of the grid. DES are a fundamental change relative to the legacy grid, which is built around large power plants, usually somewhere out of sight, and long transmission lines.

The traditional bulk power grid moves high voltage electricity long distances, which is then stepped down to lower distribution level voltage at substations, and moved to end users on the distribution grid. This is the level where DES are located, either in service of the utility company (front-of-the-meter, FTM) or on private property of the energy end user (behind-the-meter, BTM).

As well as being a key building block of a smarter grid, DES offer improvements in power reliability and resilience, cost efficiency, emissions reduction, power quality, and more diverse investment opportunities in the energy sector. DES have become cost competitive with legacy grid power, meaning businesses, homeowners, utilities, and investors now have more and better energy options to choose from. 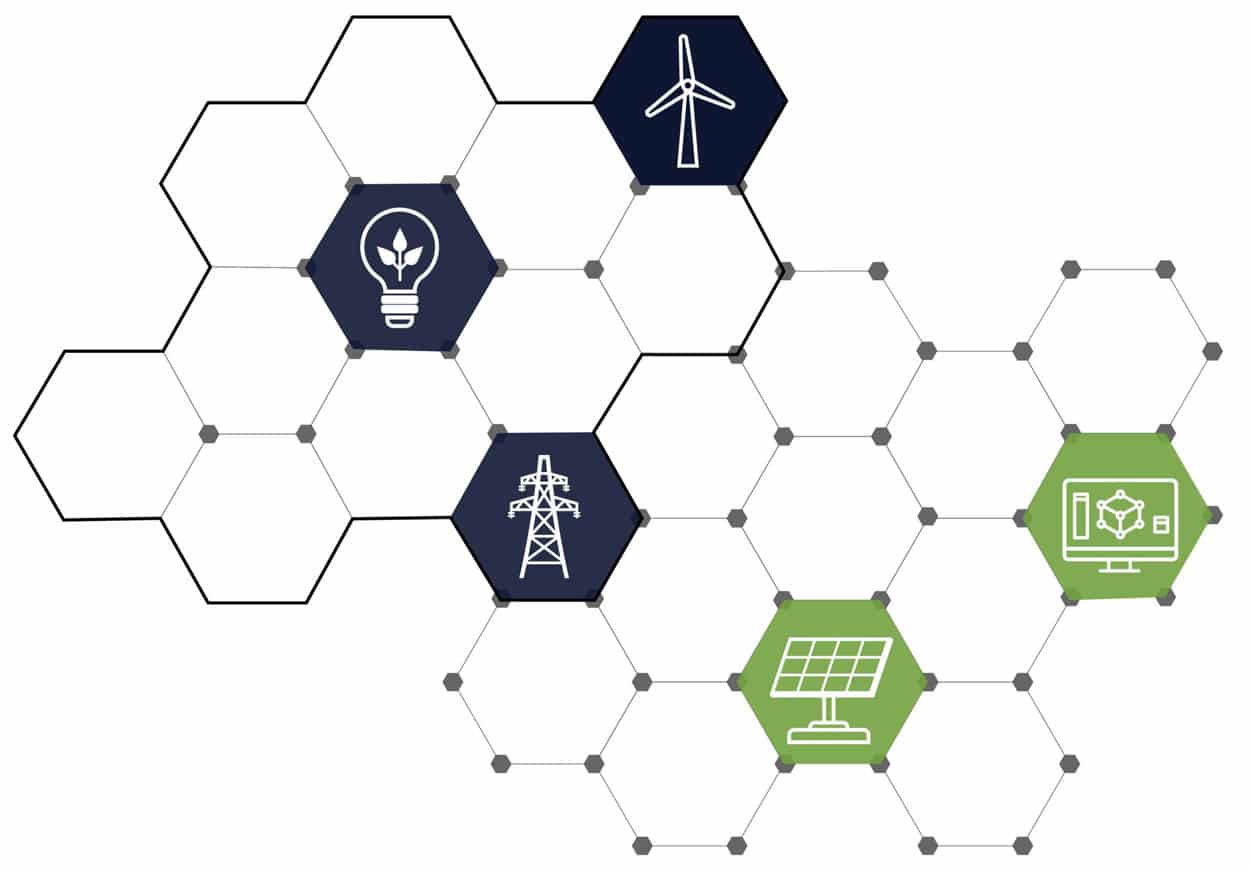 DES come in many sizes and types, and are all made up of Distributed Energy Resources (DER), with sub-groups Distributed Generation (DG), and Energy Storage Systems (ESS), plus “smart” technologies: computers, sensors, controls, and communications infrastructure. When any two or more DER are combined, the resulting system is a DES. The exception to the “two or more” rule is that ESS are considered DES even when stand-alone, because an ESS is already a system by itself (a Battery Energy Storage System, or BESS, is a lot more than just battery cells). All DES play a role in making the legacy grid “smarter”, through data monitoring and advanced controls systems that improve grid operations.

By far the most popular DER to date, as well as the most visible, is rooftop solar panels, which have become in many cases cheaper than grid power with the added benefit of reducing carbon emissions. However, many homeowners have been surprised to find that rooftop solar panels alone are useless during grid outages, because they automatically shut off when the grid is not active. Renewable DG such as rooftop solar or wind energy are “non-dispatchable” and only work as part of a more complex system, whether that system be the grid or a behind-the-meter DES (or both).

A DES that has a connection to the larger grid, but is also able to disconnect and continue operating, solves the problem of renewable DG not working during outages. A DES like this, able to “dynamically island,” is called a microgrid if it serves more than one building, and a nanogrid if it serves a single building. Microgrids are the most complex and the most multi-purpose of all DES, often having more than one type of DG (in many cases, a combination of renewable and fossil-fueled generation), ESS, and specialized controls systems and switchgear for going from “grid-tied” to “islanded” mode.

Microgrid architecture and functionality create inward-facing benefits, that is, benefits to the facility the microgrid serves: Improved power reliability and resilience, power quality, emissions reduction, and potentially cost savings. They also create benefits outward-facing, for the grid they interconnect with, by interacting with the grid as a single, controllable energy entity. Outward-facing benefits, such as Demand Response (DR), frequency or voltage support, etc., are useful to utility companies, which in many cases will pay the microgrid owner for providing these services.

For those of us who highly value having electrical power for our homes and businesses, the most important feature of DES is the ability to keep the power on. This is even more important as we shift to electric vehicles (EVs). The last time we would want to lack power to drive our cars is under emergency conditions that might cause a widespread power outage. Because of the value of reliability and resilience, some microgrids are built that actually cost more than traditional utility service, but still save money for the end user by improving uptime, safety, and energy security.

As technologies mature and become cheaper (for example, battery prices have dropped more than 80% over the past 5 years), we are seeing more and more cases where an optimized microgrid can meet the three goals of guaranteed uptime, reduced carbon emissions, and cost savings all at once. Advanced DES are now a well-proven technology, set to play a defining role in the grid of the future. If the topic is new to you, it’s worth a closer look to see if a DES is the right fit for reducing your risk of outages, carbon footprint, and utility bill.